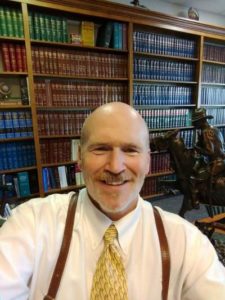 Robert H. German recently received advanced level training, from the American Association of Premier DUI Attorneys, on how to use Mental Illnesses to Win DUI Alcohol and/or Drug Cases. Robert received training on how, unfortunately, drivers who suffer from mental illness(es) will be misdiagnosed by the arresting officer and wrongfully arrested for DUI alcohol and/or drugs. Officers are specifically trained by the National Highway Traffic Safety Administration that individuals with mental illness may exhibit signs and symptoms very similar to those of an individual impaired by drugs and/or alcohol. Officers are also trained that these individuals may also be experiencing coexisting conditions of mental illness with drug impairment. Because officers rarely ask a driver, during a DUI investigation, if they suffer from mental illness, it is critical for an attorney to ask each and every client this question.

Robert H. German is a dedicated defense attorney who is committed to fighting for those wrongfully accused of violating the law.  He has the education, training and experience needed to defend the rights of individuals facing serious civil or criminal accusations.  Rob has dedicated his career to defending those who simply cannot afford to be convicted of any charges or who cannot defend themselves.  When you need representation from a skilled and experienced attorney who truly cares about the outcome of your case you should retain Rob to represent you.

Rob spent his early years in the criminal justice system as student and a police officer at the local, state and federal levels.  While a police officer he worked in the patrol division working the streets and highways of Illinois, Missouri and Arkansas.  As a patrol officer, he received extensive training in the detection and arrest of drunk drivers.  He was certified by the NHTSA in the Standardized Field Sobriety Testing and trained other law enforcement officers in administering those tests. During his police career, he was assigned to the detective division where he handled investigations ranging from homicides to large-scale narcotics cases.  He was a member of his department’s SWAT team and received significant training in hostage rescue operations and armed conflict resolution. His training and experience gives him invaluable insight when defending his clients.

As graduate of the University of Arkansas at Little Rock (B.A.) and Valparaiso University School of Law (J.D.), Rob focused his education on the criminal justice process.  He began practicing law during his second year of law school working for a major law firm and the school’s legal clinic defending clients charged with criminal offenses including drunk driving.  While in law school, he met and married fellow law student, Melissa VanVelzen.  After graduation, Rob and Melissa opened their own law practice in Spring Lake, Michigan.  They have 2 children, Robby and Riley.  During their free time, they enjoy raising horses, hunting and fishing but most of all spending time with their family.

With over 30 years as an attorney and 10 years as a police officer, Rob has focused his practice on defending the wrongfully accused.  He utilizes both his unique education and work experience to aggressively defend and protect the rights of his clients.  Most lawyers have very little understanding of how police officers think and operate.  He knows where they cut corners, ignore procedures and make mistakes all which can lead to the successful resolution of a case.  He understands when police do not tell the truth it can have a devastating impact on the lives of his clients.

There are very few criminal defense attorneys who have the background, education and experience to successfully defend people charged with drunk driving and criminal charges.  He understands everything that is a stake when defending his clients and truly cares about the outcome their cases.  Lawyers are a dime-a-dozen so choose carefully as your choice can have a huge impact on the outcome of your case.